The Grove of the Willow Wood is an inclusive, contemporary Wiccan coven led by our High Priestess, Lady Ashlen, and High Priest, Lord Solandrin. Our group is anti-racist, neuro-diverse, LGBTQ+ affirming, and family friendly.

Wicca is a broad movement with much internal diversity in its beliefs and practices, in large part because of the absence of any single leader or centralized governing body…Wiccans typically identify as Pagans and are heavily inspired by the extinct pre-Christian religions of Europe, North Africa, and western Asia and, to a lesser extent, by living non-Abrahamic religions such as Hinduism. They usually call themselves witches...Drawing on terminology associated with witchcraft, Wiccan groups call themselves covens. These are often led by a high priest and a high priestess. Coven membership is typically granted through an initiation ritual. In several older traditions, such as Gardnerian and Alexandrian Wicca, initiates can advance through two additional degrees…Being initiated into a tradition connects the newcomer to that tradition’s lineage—something that certain Wiccans place great importance on. (Encyclopedia Brittanica | Wicca)

Is Wicca a legally recognized religion?

Wicca is a legally recognized religion in the United States. We owe this largely to Lady Sintana, the Witch Queen and Elder High Priestess of Ravenwood Church and Seminary of the Old Religion, who bravely fought (and won) several legal battles–including Roberts v. Ravenwood Church of Wicca in 1982–which laid the foundation for the legal protections we all enjoy today. In 1985, the District Court of Virgina took up a similar, landmark case, Dettmer v. Landon, which found that Wicca is “clearly a religion for First Amendment purposes…Members of the Church sincerely adhere to a fairly complex set of doctrines relating to the spiritual aspect of their lives, and in doing so they have ‘ultimate concerns’ in much the same way as followers of more accepted religions. Their ceremonies and leadership structure, their rather elaborate set of articulated doctrine, their belief in the concept of another world, and their broad concern for improving the quality of life for others gives them at least some facial similarity to other more widely recognized religions.”

Do you have a sacred text?

Unlike many other major world religions, there is no singular sacred text for Wiccans–we draw inspiration and wisdom from many sources. Our group adheres to the Wiccan Rede, which is typically shortened to These Eight words the Rede fulfill: “An Ye Harm None, Do What Ye Will,” as well as Lady Galadriel’s New Wiccan Book of the Law.

Do you believe in God?

When do you gather?

Our group celebrates the Wheel of the Year–eight seasonally based festivals referred to as sabbats–in ritual, as well as the full moons (esbats) and the occasional new moon. We enjoy one another’s company, so we also choose to gather outside of ritual regularly. Non-ritual gatherings include an annual retreat, movie nights, workshops, classes, and community outings.

Our group gathers in the High Priest’s home from Samhain until Ostara and in the home of the High Priestess from Beltane to Mabon. Weather permitting, rituals take place out-of-doors in the evenings. We use the ritual tools common to most Wiccan groups–representations for each of the elements (water, fire, earth, and air) and for the God and Goddess, and any other tools deemed necessary for the ritual–all arranged on an altar. Sabbat rituals are typically celebratory in nature while full and new moon rituals are opportunities to conduct workings and for training purposes. After ritual, we gather for feasting and fellowship. While some Wiccans prefer to perform ritual “sky clad” (nude), we do not engage in or permit nudity in our group. Our members wear robes (typically black) in ritual tied at the waist by a cord called a cingulum.

We are an inclusive, contemporary coven. No one will be precluded from participation or initiation on the basis of their race, gender identity, sexuality, etc. We will not, however, initiate anyone who has not yet reached the age of 18 and anyone younger than 18 who wishes to take classes must have parental consent to do so.

We are not actively accepting new members but believe that when someone is meant to find their way to us, the universe conspires to make that happen. Contact us for more information.

How is the group structured?

In many groups, initiates must leave when once they achieve the rank of Third Degree. In our tradition, we value our Elders and are honored when they choose to stay with us. Many of these Elders serve as members of our Elder Council, a group of Thirds who provide advice and counsel to the High Priestess and High Priest.

First Degree Initiates:
– have completed their initial training
– wish to declare that this is their personal path
– involved with the group for at least a year and a day

In our tradition, 1st degree initiates wear a red cingulum in ritual.

Second Degree Initiates:
– are associate ministers
– serve as teachers and leaders
– can perform ceremonies and rites with supervision
– wish to declare their commitment to the group

In our tradition, 2nd degree initiates wear a green cingulum in ritual.
Those who choose to serve in this capacity are given the honorific of Lord or Lady.

Third Degree Initiates:
– are fully ordained ministers
– perform ceremonies and rites
– mentor and train seekers and initiates
– have committed their life to serving the greater community

In our tradition, 3rd degree initiates wear a red, white, and blue cingulum in ritual.
Those to attain this rank are considered High Priests and High Priestesses of Wicca.

Those who have not yet initiated but who plan to pursue initiation are referred to as neophytes.

In our tradition, neophytes wear a white cingulum in ritual.

Friends of the House

Those who simply wish to gather for fellowship and community with no intentions of initiating are referred to as “Friends of the House.”

Friends of the house typically dress modestly and in dark colors to attend ritual.

Where did the group’s leaders receive their training?

Both Lord Solandrin and Lady Ashlen were initiated by Ravenwood Church and Seminary of the Old Religion, as were many members of the Grove’s Elder Council. In the 1990s, three scholars–one of them a Ravenwood initiate–wrote Living Witchcraft, a sociological account of Ravenwood’s operations. You can borrow a virtual copy of their work from the Internet Archive to learn more about the Ravenwood Tradition. 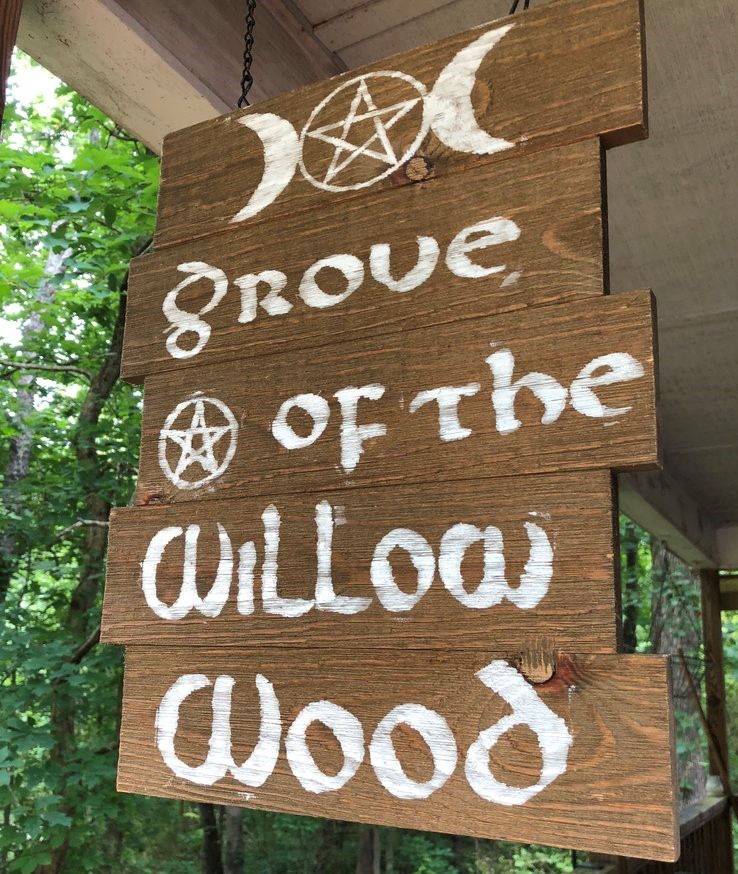 The Grove is a close-knit community of like minded individuals who gather together to celebrate the turning of the Wheel, the cycles of the moon, and for fellowship. While families with children are welcome to attend our celebrations, only adults may take classes or pursue initiation.